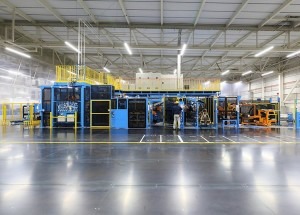 Hanover, Germany – Bridgestone, Sumitomo Rubber Industries (SRI) and Continental were among the winners of this year’s Tire Technology International Awards held on 15 Feb in Hanover, Germany.

Japan’s SRI won its third “tire technology of the year award” with its advanced 4D nano design. The system uses cutting edge technology to perform highly realistic simulations of the internal structures and behaviours of rubber materials at the nano scale. The technology uses a combination of synchrotron radiation and neutron beams and advanced simulation technology.

Another Japanese company, Bridgestone won the tire manufacturing innovation of the year for its Examation tire assembly system. The equipment, which has been installed at the company’s Hikone plant in Japan, combines specially developed ICT with artificial intelligence to improve quality and enhance productivity in the factory.

Announced during Tire Technology Expo (TTE) 2016, collaboration between Italy’s Versalis and US-based Genomatica for production of renewable butadiene won this year’s environmental achievement of the year.

The Dutch machinery group, VMI wont tire industry supplier of the year award for its supply of innovative machinery to the industry. The company launched the Milexx truck-tire building machine at TTE 2016, followed by other products including the Retrax automated pre-cure tread applicator and the Pixxel vision system.

Hanover-based German tire maker Continental won the tire manufacturer of the year award for its technology projects and innovations and working consistently within the scope of its Vision 2025 long-term growth strategy.

Lifetime achievement award went to professor Gert Heinrich of Leibniz institute for polymer research, Dresden who has more than 450 journal papers to his name, making him one of the most published researchers in the EU.