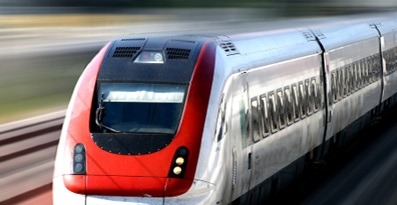 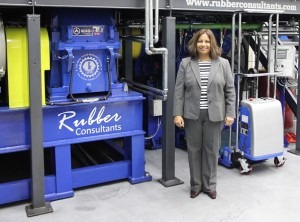 Based on article originally published in ERJ Jan/Feb 2016 issue.

The introduction of new railway safety standards form the background for a major development project at the TARRC rubber research centre, led by Dr Marina Fernando

A: Traditionally, halogenated rubbers, such as polychloroprene, or PVC based materials were the material of choice for achieving the required flame resistance. However, it was recognised that halogen-containing rubbers and/or halogen-containing additives, increased the level of smoke development, as well as the toxicity of the smoke (by the evolution of hydrogen halides), during combustion. Alternative approaches were considered based on inorganic fillers and other families of halogen-free additives. Inorganic fillers were favoured for their low cost and found to give acceptable levels of fire resistance, but typically required large quantities, around 65 percent by weight, to achieve the necessary levels of fire resistance. Whilst, this approach was found to be adequate for non-load bearing rubber parts, the reduction in strength associated with a high filler loading makes this approach unsuitable for load-bearing components, such as rubber springs in the rail bogie.

The new EU standard has criteria for different product categories in rolling stock and testing involves, the assessment of fire parameters such as flame spread, ignitability, rate of heat release and smoke density and toxicity. The industry, therefore, has begun to use available non-halogenated elastomers, with halogen-free additives to achieve compliance to the requirements of the new EN standard EN45545-2.

With an expansion of the transport network in Europe, necessitated by an increase in commuter numbers, the market for fire-retarded rubbers is forecast to increase by about 5 percent per annum to 2.8 million tonnes by 2020. New technologies based on main chain modification of the polymer backbone, with elements capable of imparting a greater degree of heat resistance will evolve in the future to meet this growing market demand.

Q: In terms of materials development, what are the main challenges for rubber product manufacturers?

A: In elastomer compounding, the use of high sulfur compounds and amine based antidegradants should be minimised and if possible avoided. High levels of these ingredients will increase smoke toxicity. In terms of inorganic fillers, magnesium hydroxide which is considered to reduce the smoke levels, has been shown to increase the rate of heat release. Hence the compounder has to achieve a compromise solution in order to meet criteria in terms of heat release and smoke density, whilst reducing the use of any additive that will contribute to the toxicity of the smoke.

An additional complication in fire protecting load bearing components is the reduction of strength properties with the high level of inorganic fillers used in fire retardant rubber formulations. However, new generation of functionalised inorganic fillers could present a solution as well as the use of compatibalisers and coupling agents to provide the rubber-filler interaction, which would improve dispersion and thus the strength.

Q: What are your customers most concerned about in terms of rubber materials?

A: Cost of new technology is a prime concern as end-users faces stiff competition within the industry.

Q: Which flame-retardant materials technologies does TARRC specialise in?

As a natural material, it has low toxicity and this has been demonstrated by the low conventional index of toxicity (CITg) measured for Natural-FR in third party testing. The objective of the Natural-FR development at TARRC was to offer the industry, a price competitive, low toxic, green solution to meet material flammability requirements.

Q: Which manufacturing and/or materials technologies are key to reducing cost and maximising effectiveness of fire-retardant rubber products?

A: Mixing of fire retardant formulations with a high loading of filler is a critical first step in the manufacturing process. The mix cycle must be designed to improve filler dispersion, so that uniformity in the mixed rubber compound is achieved. Then the process of transferring these highly filled rubber compounds, to the final form of the product using conventional rubber processing methods needs to be considered. Optimisation of the manufacturing process is crucial in terms of achieving a consistent product.