Tire industry on the road to universal RFID standard 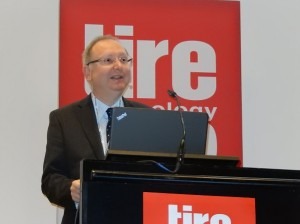 The Michelin specialist provided the update in a presentation on the progress of ISO TC31 WG10 standard working group during the Tire Technology Expo conference, held 20-22 Feb in Hanover.

Loiret is co-convenor on the ISO TC31 WG10 working group, representing French standards body AFNOR – along with Dong Lanfei of China’s SAX/TC19 technical committee for standardisation of tires and rims.

Some 60 experts from Austria, Belgium, China, Finland, France, Germany, Italy, Japan, Netherlands, South Korea, Thailand, UK and US are also providing input to the working group, its co-convenor pointed out.

The working group’s efforts to establish ISO TC31 WG10 as a universal standard for the adoption RFID tags started with a kick-off meeting in July 2016,. This was followed by three meetings last year and one on 22-23 Feb, hosted by CUNA and Bridgestone, in Rome.

A further meeting is scheduled for 24-25 May in Japan, to be followed by a final gathering to approve all aspects of the standard in September.

As of 20 Feb, Loiret said the working group had delivered four ‘texts’, which were all still under discussion:

Loiret went on the explain the potential benefits of the RFID standard, saying that it would help “guarantee” readability of tires in all conditions during manufacturing, storage, in-use and end-of-life management stages.

The flexibility and readability of RFID tags will deliver benefits for OEMs, dealers, governments, retreaders and tire makers, continued Loiret.

RFID, he added, opened up new opportunities in the area of connected and autonomous vehicles, such as in verifying that fitted tires were in good condition and suitable for driving conditions, and in offering predictive-maintenance functionality.