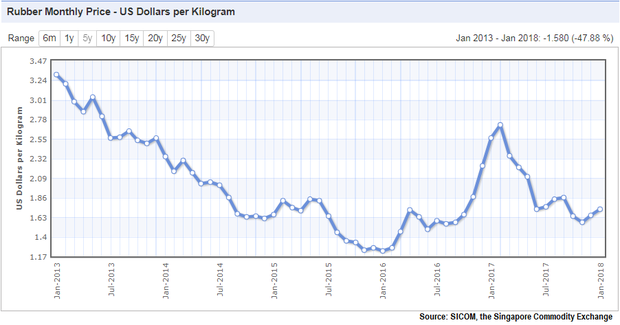 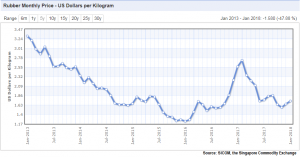 Kuala Lumpur – Global demand for natural rubber (NR) is set to grow at 2.8% in 2018, considerably higher than 1.2% observed during 2017, according to the Association of Natural Rubber Producing Countries (ANRPC).

Contributing to this growth, said ANRPC, are an improving global economy, and the expected impact of recently approved changes to US taxation policy.

Furthermore, the outlook for commodity market prices is expected to strengthen during 2018, due to oil production cuts by OPEC and political tensions in the Middle East.

The growth rate in production is slightly less than the previous year’s growth rate, which stood at 4.7%.

The slower rate was mainly attributed to a lower production anticipated by Thailand at 4.375 million tonnes, down by 1.2% on a year-to-year basis.

The same seasonal factor will soon be seen in other major producing countries, predicted ANRPC.

“Slowdown in NR supply may be expected, and this may lead to a much-balanced supply-demand NR market in the coming months,” the association concluded.