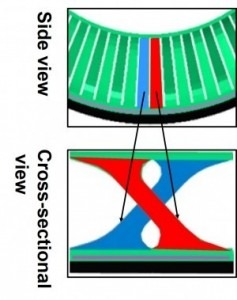 Tokyo-based Toyo has been working on airless tires since 2006 and introduced a prototype in May 2012.

The latest version, it said, has undergone fundamental changes in its structure compared to the previous prototypes and delivers “substantial improvements” in performance indices.

According to Toyo’s statement, it is possible to drive the new tires “at a practical level”.

For the inner core side, the basic tire structure comprises of special high-rigidity resin spokes to ensure sufficient strength to support the load.

Basic tire performance, namely “drive, turn, stop” is also achieved by using a rubber material for the outer tread that comes into contact with the road surface.

Between the spokes and rubber tread, the outer diameter ring is reinforced with carbon fibre reinforced plastic (CFRP) which serves to reduce the load imposed on the spokes.

Durability has been improved by achieving a completely unique support configuration form, the tire maker continued.

Toyo claims that the tire’s durability “vastly exceeds” the equivalent legal and regulatory requirements for its commercial pneumatic tires.

Rolling resistance, added Toyo, “has been reduced by at least half compared to previous prototypes and is 25% better even when compared to Toyo Tires commercial products.”

Toyo said the good results were achieved partly due to the adoption of fuel efficient tread rubber composed through its material design technology “nano balance technology.”

“Road noise has also been significantly improved compared to previous prototypes, with a level similar to that of current pneumatic tires,” Toyo added.