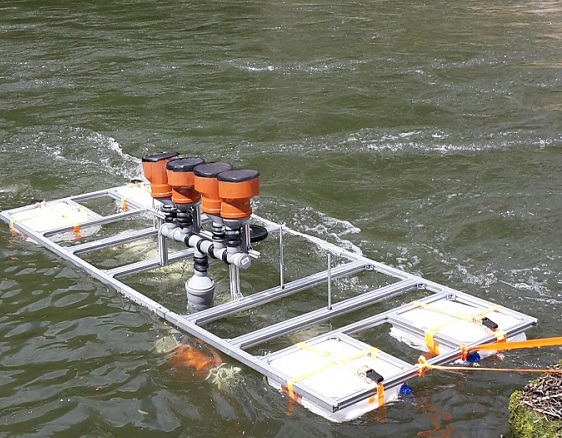 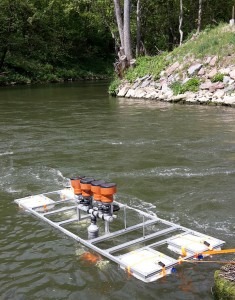 Würzburg, Germany – Water is still the most important source of renewable energy in Bavaria, Germany, accounting for some 33% of all renewable energy produced in the region, as showed by the Bavarian Energy Map.

But conventional hydroelectric plants, especially micro hydro generators, are a subject of controversy due to their low output volumes and their interference with the ecosystem.

Fraunhofer researchers are working on an environmentally friendly alternative: in the future, innovative elastomer materials are set to convert the mechanical energy produced by flowing water in small rivers directly into electrical energy.

Under its energy policy, the Bavarian State Government has defined new objectives for the transition to a greener energy economy: by 2025, some 40% of electricity required in Bavaria should be supplied by local renewable energy sources.

In the DEGREEN project, the Fraunhofer Institute for Silicate Research ISC is pursuing an innovative approach to renewable energy generation using hydropower. To this end, the Würzburg-based researchers are using highly flexible and ultra-thin elastomer films that work as capacitors.

The silicone films are coated on both sides with a conductive elastic layer and furnished with a protective layer of insulation. They are installed in small rivers and streams where the constant deformation and relaxation of the elastomers converts the mechanical kinetic energy from the water directly into electrical energy.

The flowing water deforms the soft film, the characteristics of which are similar to those of a balloon. When deformed, the films carry a high electric charge generated by the stretching process. The elastomer film is then mechanically relaxed to its original state.

“At this point, a high volume of electrical energy has been generated and charges a temporary storage device on an integrated circuit. It is from here that we siphon the energy. This deformation and relaxation cycle is repeated once a second,” explains Dr. Bernhard Brunner, project manager and scientist at Fraunhofer ISC. “If we apply a potential of 4000 volts, for each deformation we can generate 100 milliwatts of electrical power per film.”

But how is this cyclic deformation of the films achieved? Brunner and his team have implemented a smart mechanical excitation concept. Water flows through a constricted tube building up negative air pressure – a concept also known as the Venturi effect – which causes the elastomer film to deform (see the cross section of the Venturi tube).

An air valve is then opened to equalize the negative air pressure and the elastomer film returns to a non-deformed state. What makes the design so ingenious is that the air vent is self-controlled: it opens and closes on its own without requiring electronics or power.

Changing the diameter of the film enables the researchers to adjust the pressure. Consequently, the generator can be adapted to the flow rate. Comprising films, tube, vent, pump, air duct, electronics and rectifier, the overall system has a modular structure.

The tubes, which also have a flexible diameter, are adjusted according to the depth and width of the water and are set up either on top, behind or next to one another. If a river is wide but shallow, it is recommended to mount the tubes next to each other.

“One major advantage of our concept is its flexibility: it can be used in water of any depth. We harness the water’s fluid energy. Our elastomer generators are ideal for small rivers and can be operated at flow velocities from as low as 0.5 meters per second and at depths of 0.5 metres.

“In Bavaria, there are some exceptionally small rivers which together cover a length of some 30,000km. Our system, which is not influenced by wind or sun, is the perfect solution. If we installed 1000 of our generators, we could help bring Bavaria a major step closer to achieving its transition towards greener energy,” says Brunner.

In total, such a system could supply the grid with 876 MWh of power annually. Austria and Switzerland – with their abundance of mountain streams – as well as developing countries would also benefit from this innovative mechanical excitation concept.

The elastomer generators are designed to operate silently in shallow and small waters without a check dam. They are suitable, for example, for use as a decentralized power supply for campsites or remote settlements located in the immediate vicinity of water.

In the lab, Brunner and his team are currently developing two types of generator: one that floats and one that is fixed to the riverbank. They are currently working on miniaturizing the generator’s size.

By the end of the project, they expect to come out with a weather- and flood-proof system that is about the size of a switch control box.

Alongside the tests in the laboratory, the Fraunhofer scientists are working in close collaboration with local authorities, the water board and environmental authorities to conduct field tests with prototypes in the Wern and Tauber rivers, which provide realistic experimental conditions. Their goal is to generate 100 watts of electrical power per generator on a continuous basis.