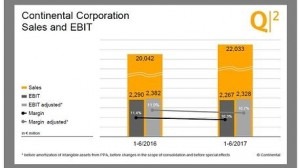 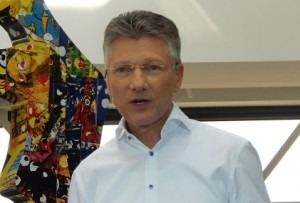 Hanover, Germany – Sharply higher raw-materials costs at its rubber-based operations dented a strong first half at Continental, which saw sales rise by around 10% to €22 billion across the group and higher earnings in other business areas.

The unit, which also includes Continental’s Tire division, was hit by higher raw-materials costs – particularly for natural and synthetic rubber – that reduced earnings by €300 million.

Continental executive board chairman Dr Elmar Degenhart expects the price increases to decline over the second half of the year. Overall, he anticipates a total negative impact of around €450 million as at the end of the year – €50 million less than forecast at the start of 2017.

The Rubber Group’s performance took the shine off a strong showing elsewhere at Continental, including a rise in order-intake at its Automotive Group to over €19.5 billion in first six months

And, while Continental's overall operating result was down slightly year-on-year at €2.3 billion, the German group has raised its sales forecast for the current fiscal year again on the basis of the half-year figures.

“Sales growth in this area came to 10%. For this reason, we are raising our forecast for the corporation’s sales by €500 million to more than €44 billion,” he added.

Despite “challenging” market conditions, Degenhart said he was confident that the Rubber Group’s “contribution to earnings in the second half of the year would be higher than in the previous year again.”

In the Rubber Group, expansion of production capacity and sales channels plus the Hornschuch acquisition, added 5,600 employees, while the Automotive Group workforce increased by over 4,700.