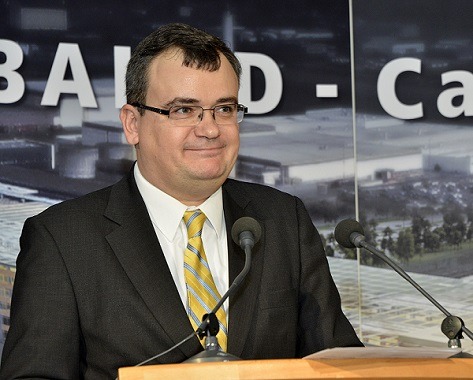 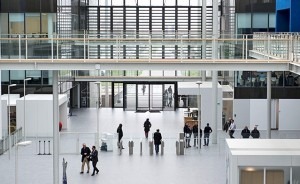 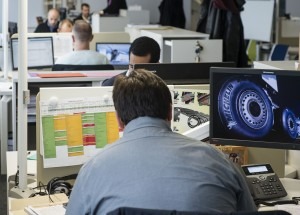 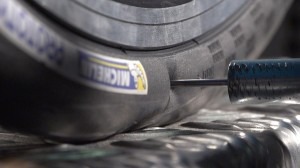 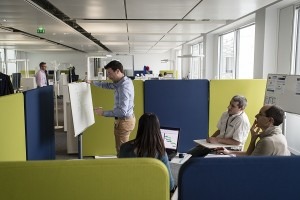 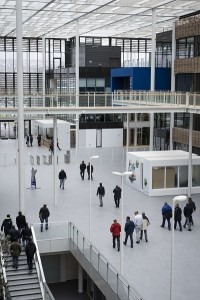 ERJ: Michelin is currently undergoing a €270-million upgrade of its technology centre in Ladoux, near Clermont-Ferrand, France. Could you tell me the reason why you launched the upgrade?

PR: Basically Ladoux was founded in 1965 as a [tire testing] track at the beginning and the office building came in the 70s. The offices were made out of concrete with many private spaces which were absolutely not adapted to project team work.

There were different services were separated, particularly for confidentiality purposes. At that time, Michelin had a very strong competitive edge over its competitors and the aim of the research centre was to develop products. Efficiency was not as big a concern as it is today….

In this new building [RDI Campus] we have no private offices. Nobody, not even myself, has a private office and everything is in an open space.

So that was the reason why we decided to renovate the site as the way we work has drastically changed over the time.

ERJ: At the opening ceremony of the RDI campus, Michelin CEO Jean-Dominique Senard referred to a “digital revolution” that this new campus would bring about. What I would like to know is how Michelin will meet the demands of its customers via this digital revolution.

PR: The digital revolution, I would say, is already a reality for Michelin.

As you probably know, we sell a lot of electronic devices with our earthmover tires and we have been doing this for a long time.

It is called MEMS (Michelin earthmover management system), which is basically an electronic device that knows what the tire is, its pressure, temperature, and is able to communicate with the operator.

Another point, which is again a reality, is RFID in heavy truck tires.

RFID is a chip which is fitted into a tire and carries the name, model and all the characteristics of the tire. We have already produced 4 million tires with RFID chips inside, and now have reached a production capacity of 1 million unit per year.

So, the digital revolution is quite a reality at Michelin.

We are obviously working furthermore in the field of digitalisation and connectivity of tires. For instance we are working more and more with OEMs, which look for information from tires as part of their connected mobility strategy.

ERJ: What about the manufacturing process and digitalisation in production?

PR: Yes, manufacturing 4.0 is also another thing that we are focusing on. We are working internally but we also have a lot of partnerships in particular with universities in France, here in Clermont-Ferrand, toward Industry 4.0.

ERJ: When we were talking to big car manufacturers, and vehicle designers, one of the big demands from tire-makers was tire simulation technology and they wanted tire-makers to have home-grown technology. How is the RDI campus going to address that requirement?

Tire simulation is a very strong discipline of expertise in Michelin. It’s a historic strength of Michelin. We developed our own finite element analysis (FEA) code, and we had a Cray One, a beautiful computer at the beginning of the 90s.

Therefore, it is natural that we develop partnerships with OEMs, and you’re absolutely right, the further we go the more they want the modelling of tires for the modelling purposes of an entire car.

Just to give you an example, we have our own FEA code, which carries out one trillion logical operations per second. It is obviously not as costly as in the past, but it makes a statement about Michelin’s simulation abilities.

ERJ: So these technologies are becoming more and more affordable.

PR: Yes, absolutely. But simulation has evolved a lot. A tire is complex but the complexity is mostly due to the materials we use.

As you know, rubber is a very complex material, particularly the materials we use which are never pure rubber. It is usually rubber compounded with silica, carbon black, metallic wires or textiles, etc.

So the complicated part is to have a very good simulation of a tire which takes well into account the specific features of the materials. To have very good modelling of a tire is to take those complex materials into account.

I think one of the strengths of Michelin is to be able to offer a good modelling of its tires because we have a good understanding of the materials we use.

And that is the key to understand. I think a lot of people don’t understand why it is so difficult to simulate a tire.

ERJ: And you are developing this technology in-house?

PR: Absolutely. We are developing this software in-house, especially the FEA, and what is also in-house, which is one of the most-preserved secrets of Michelin, is the way we model the materials and the way we use their characteristics in our calculations.

There is a lot of know-how there. And it is something definitely in-house.

ERJ: Can you tell us, generally, what are the most exciting technologies currently being pursue at Ladoux?

PR: It is difficult but I will try to pick a few.

Second point which is very important for us is adherence [grip], because of the safety of our customers.

We are working a lot on sustainable adherence.

This is very important for us as the grip can develop over the life of a tire. And it is important to know how the performance is throughout the whole life of the tire.

So, we are working a lot in this area to improve the adherence of the tire at the end of its life. To this end, we have developed very good tires, such as Premier All-Season in the US. We are launching a new version of our cross-climate tires which is our summer tire with winter certification (3 peaks mountain snow flake). We have also launched cross-climate plus which has enhanced adherence at the end of the life of the tire.

It is very important for us to be able to develop new technology which will make the adherence of the tire better throughout the whole life of the tire.

So why is it important? Because we are sure that we can use a tire till the 1.6mm tread depth. It’s good for the environment and serves two more purposes. One, you can use the materials for longer and second, the rolling resistance drops with the wear. The lower tread depth you have, the better your rolling resistance. So, it will be an advantage to keep the grip as good as we possibly can throughout the whole life of the tire. This way, tires will be removed only at the legal limit of 1.6mm tread depth.

We also have another cutting-edge technology which improves performance, and that is the 3D printing of moulds.

With 3D printing, we can make moulds with very complex features. The idea is to have tread features that can regenerate throughout the life of tire.

So, when you wear the tire, you have this complex feature and then you make a new sculpture feature appear throughout the whole life of the tire. And it will, I would say, increase the adherence and compensate the loss of tread depth.

For that, we have developed very complex sculptures and mould features which make the adherence performance more sustainable.

Today, our know-how is clear. We are able to make tires, which in the used state, i.e. 1.6mm tread depth, have more adherence [grip] than new tires sold by competitors.

We think it is something very good for both performance of the tire and the environment.

So, the machines for the 3D printer are developed by this JV. We are pretty proud of this development and we are aiming at deploying this technology beyond tires.

ERJ: What sort of scientists work at Ladoux?

PR: We have 3,500 people working in Ladoux. Of that number, 50% are working in shops, including tire shops, testing shops, material labs – so the jobs are typical jobs that you can find in the industry. These are generally technicians, blue collar workers, who do typical shop works, i.e. manufacturing tires, making mixers and doing tire measurements. That comprises 50% of Ladoux’s personnel, which is dedicated to rubber and tire testing industry.

We have a lot of different expertise, 180 different to be precise. That explains why we have such a big research centre here in Ladoux.

Michelin has a worldwide footprint. People sometime wonder why we have such a big research centre in France. It is important to know that our company is global and our customers are everywhere in the world and we have development centres in different parts of the world.

We have a development centre in Brazil, North America, Japan, Thailand, China and India, and of course France.

Those centres have basically the mission to develop new tires for their markets. And for that, they use a mix of different technologies available to them to design the best possible tire on their specific market.

So, the final product is defined in the different development centres throughout the world. A tire is black and round anywhere on the planet but customer expectations can be very different from one side to another. For instance, wear is the primary concern in the US, while handling is important in Europe and noise in Japan.

We then have Ladoux, which is the only research centre where we have all the expertise. We also have some research activity in Japan and the US. But definitely, most of the research is made in Ladoux, because we need to be good at all those 180 subjects.

As an example of the technologies supplied to those technical centres by Ladoux, I can mention the 3D printing of the moulds which is a new technology.

Another example is the use of silica-based mixes, which are the origins of low-rolling resistance tires.

Another example of technologies is hybrid textile cords made of aramid and nylon, which offer a very good technology for radial aircraft tires and increase the number of landing per tire by 30%.

ERJ: What is the role of Ladoux in developing new materials? What are the most exciting materials that you’re working on in Ladoux?

PR: We are working very strongly internally in the field of elastomers.

We produce our own elastomers, in France in outskirts of Bordeaux; in Louisville, the US, and we are building a new plant in Indonesia.

If you look at low rolling resistant tires and the new generation of tread mixes, you would see that the elastomer is the key.

We are also working very hard on new silica-based mixes made with new generation of synthetic elastomers.

Bio-based materials are additionally of importance to us. You know butadiene is a keystone for rubber here. And we are now developing a new process for bio-butadiene production.

This has been funded by the French government and we are working in partnership with IFP (institut Francais du petrole) on the project.

We are also working on new metallic cords and textile cords and aim to use these cords in a very innovative way.

We are working in partnership with suppliers of carbon black, silica, and also organic additives, and are obviously working on them to understand what is need to enhance the performance of tires.

We have very strong knowledge of what the relationship between the structure of different materials and their performance in tires.

ERJ: That completes our interview. Many thanks M Robert.