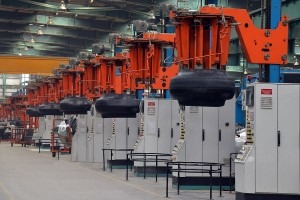 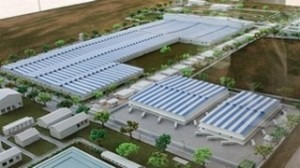 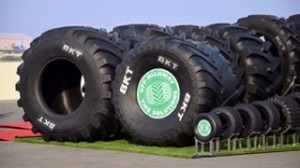 The plant has actually been running since early 2012 and has reached a daily production of 150 tonnes, about 50 percent of full capacity. The entire project is scheduled to be completed by the end of this year.

This includes a thermoelectric power plant to cover the needs for water vapour and electricity throughout the entire site and huge water collection tanks provide water reserves even in droughts.

A small town was built for employees, including modern flats for 406 families, a mall, a green area, a recreation centre, a medical centre, and a fire station.

“The primary resource for the growth and success of any business is its staff,” commented Arvind Poddar, chairman and managing director of BKT.

The tire plant is equipped with modern compound mixers, complex equipment for the production of steel rings and new vulcanising presses even for large tire sizes, the BKT statement continued.

The Bhuj testing track, the one and only in India, has been designed for tire-trialling on different surfaces from uniform road conditions to rough terrain, it added.

A new R&D centre is, meanwhile, being built for research on new polymers and tread compounds.

Like all BKT plants, Bhuj has obtained the ISO 9001: 2000 Quality Certificate. As far as production parameters, quality control and environmental regulatory requirements are concerned, BKT adheres to the strictest international standards.

The Bhuj production site is a milestone in BKT’s growth, according to Lucia Salmaso, managing director of BKT Europe.

“Not only for its high levels of technical and quality standards, but also because it is the BKT plant that is situated at the closest distance to a port - a decisive factor to speed up delivery time,” said Salmaso.