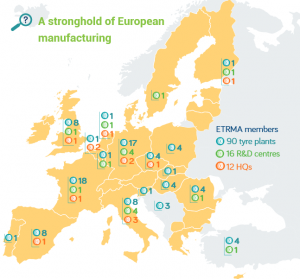 Brussels – The European Tyre and Rubber Manufacturers’ Association (ETRMA) published its latest update of the European Tyre Industry Facts and Figures on 10 July, where it highlighted growing competition against EU tire-makers.

According to the document, European tire manufacturers are losing their market share to competition with the share of top 10 manufacturers in the EU going down from 83 percent in 2000, to 63 now.

“Since 2007, tire production has declined by 9.1 percent. This poses a major threat to the EU’s future growth and job prospects.

In addition to that, the industry is facing extra costs because of the EU Emissions Trading System, said ETRMA, adding that the costs have put another burden on the competitiveness.

In terms of technology, the EU tire market invests about 3.5 percent of its annual turnover in innovation every year, said the document.

“Each of the major companies holds approximately 5000 patents (in products, processes and equipment),” it added.

Some 300 million passenger car tires are produced in European plants and with 263 million tires sold in the region, the EU represents 20 percent of the global tire market.