US 2018 Market Data: Shipments up, production down 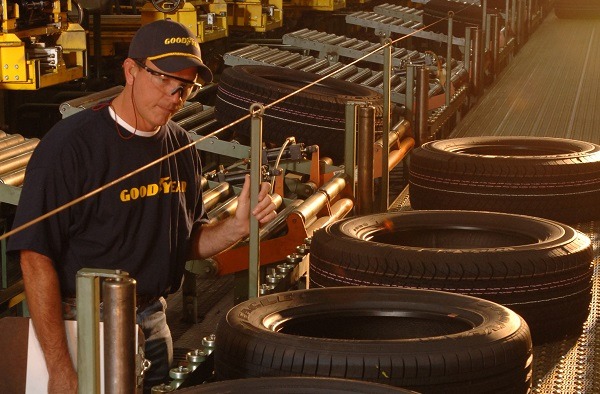 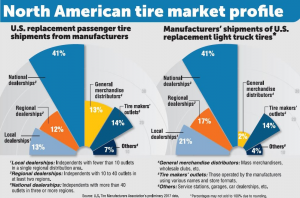 Akron, Ohio – A funny thing happened on the way to the anticipated revival of US tire manufacturing — production fell in 2017 for the second straight year.

Despite billions of dollars of investment in capacity expansions, the opening of three tire factories in the US in the past couple of years and record aftermarket shipments, US output of passenger and light truck tires fell in 2017, according to the latest industry data from the US Tire Manufacturers Association (USTMA).

This revelation plays out against record US aftermarket passenger and medium truck tire shipments and a relatively flat year for imports.

At the same time, a new report from GfK Group states that U.S. tire retailers reported a drop of 5.6% in tire sales last year, including a 26% plunge in winter tire sales.

These and other trends can be gleaned from this year's Market Data Book, which is part of the 12 Feb print edition of Tire Business, a US-based sister publication of ERJ.

In terms of US production, it was anticipated that the commissioning of three new plants — Giti Tire Group's in Richburg, South Carolina.; Hankook Tire Co. Inc.'s in Clarksville, Tennessee; and Kumho Tire Co. Ltd.'s in Macon, Georgia — in the past 18 months would boost domestic production. Together these three plants represent nearly 20 million units of new annual manufacturing capacity.

In reality the US industry collectively produced 1.1% fewer car (121.3 million) and 7.7% fewer light truck (26.1 million) tires last year than in 2016, according to the latest figures from the USTMA.

One possible explanation for part of the dip is the conversion of capacity at several factories to larger rim diameter tires, which can actually reduce a plant's capacity in units due to the changes in building and curing cycles. Tonnage output tends to stay the same or rise slightly, while the value of the output increases measurably.

The commercial segment, on the other hand, experienced growth in shipments, production, imports and exports.

Imports of passenger tires and medium truck/bus tires increased over 2016, up 0.6 and 5.1%, respectively, to 147.5 million and 14.6 million units, according to U.S. Department of Commerce data.

Imports of passenger tires from China — which have been subject to elevated import duties since 2015 — plummeted nearly 35% from 2016 to about 10.6 million units, falling to fifth behind Thailand, South Korea, Indonesia and Mexico among foreign sources of car tires.

2017 marks the third straight double-digit decline in imports from China.

On the sales side, most tire companies' revenue showed some improvement over 2016, both in unit volume and dollar revenue.

On the retail side of the ledger, Discount Tire/America's Tire and Bridgestone are ranked one and two, with $4.73 billion and $4.5 billion in fiscal 2016 sales, respectively.

Also worth noting: the USTMA's shipment data show the shares of the car tire aftermarket controlled by "local dealerships" — those with fewer than 10 outlets in a single regional distribution area — fell by a percentage point to 13%, while holding steady in the light truck area at 21%.

Other nuggets gleaned from the Market Data Book include:

Demand for high-performance tires in the US continued to increase, especially on the replacement side, where shipments of tires H-rated and higher now represent 44% of aftermarket shipments, up from 40% in 2016. The OE share jumped five points to 55.8%, the USTMA data reveal.

Shipments of aftermarket speed-rated tires rose 9.1% to 92 million units, while those to OE customers actually slipped 4.1% to 25.2 million units, but light vehicle production in North America fell even more, thereby accounting for the share gain.

The shift at OE is also reflected in the breakdown of OE tire sizes, where the 10 most popular sizes are now all 17-, 18- or 20-inch rim diameter sizes.

Goodyear remained the No. 1 supplier of OE consumer tires last year, outfitting an estimated 26.5% of the 17.2 million cars, SUVs and light trucks built in North America in 2017 with its Goodyear and Dunlop brands. Michelin North America was No. 2 with its Michelin and BFGoodrich brands, ahead of Bridgestone Americas (Bridgestone and Firestone brands) and Continental Tire the Americas LLC (Continental and General brands).

• South Carolina remains the No. 1 tire-producing state with estimated daily tire production of roughly 110,575 units. Oklahoma holds the No. 2 spot at 88,000 units, ahead of North Carolina at 75,000. North Carolina, however, is destined to grow with the commitment by China's Triangle Group to build a pair of plants in the Tar Heel state.

US shipments of winter/traction tires slid for a second straight year — by about 36% — and accounted for just 2.1% of all replacement car tire shipments. By contrast, winter tires represent more than 35% of aftermarket car tire shipments in Canada. The Market Data Book also contains benchmarking information on the automotive service sector and summaries of Tire Business' retail, commercial and retread rankings from 2017.