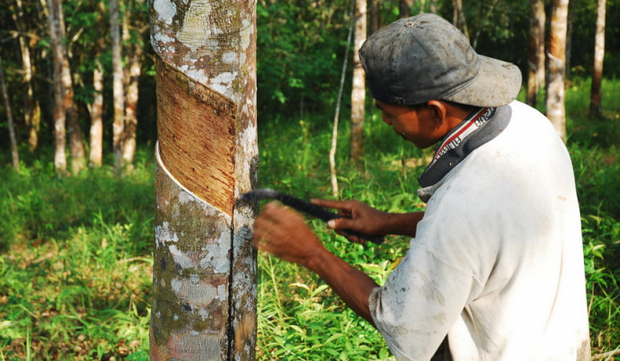 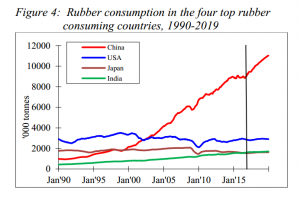 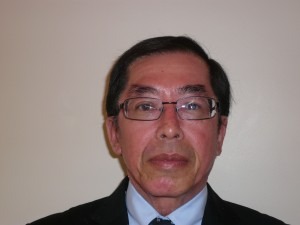 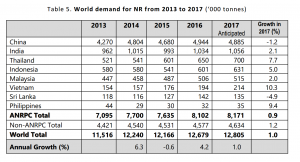 London - After some signs of recovery during early 2017, natural rubber (NR) prices have fallen back as trends around the supply/demand balance move back in favour of buyers.

The Association of Natural Rubber Producing Countries (ANRPC), for instance, anticipates that global consumption will grow by a mere 1% to 12,805 million tonnes by the end of this year.

This is in contrast to an expected 5.1% growth in production to 12.883 million tonnes, according to the association, which represents 11 NR producing countries in the south east of Asia.

Similarly, market analyst Dr Prachaya Jumpasut, editor of The Rubber Economist, notes that while global rubber consumption has increased at a faster rate than last year, the next three years will see the market develop at a pace below historical averages.

And, in written comments to ERJ, Jumpasut said: “After two consecutive years of slow growth, NR output should pick up this year and the next.”

The Rubber Economist editor said the sharp rises in rubber demand in the past and during the rapid economic growth in China should now give way to a “steady by gradual rising trend” in the near future.

This trend, he added, will not be only influenced by China but by other Asian rubber-consuming countries too.

A reduction in tapping activity as well as a severe wintering season in Thailand pushed NR prices up for the first two quarters in 2017 before the commodity surplus impacted the market again in the third quarter.

As put by Jumpasut, the “fundamental factor” of the stocks/consumption ratio explained the sharp movements in NR prices. This same factor, he said, “is also pointing to a further increase in rubber prices for the next few years.”

Taking a very different view, former secretary-general of the International Rubber Study Group (IRSG) Hidde Smit told ERJ that the NR market will suffer for the next decade due to over-plantation during 2005-2013.

“There will be a massive surplus capacity for another 10 years at least, and NR prices (TSR20, Singapore) will be around $1.50 per kg,” Smit forecast.

But for now, physical prices of NR are increasingly dominated by sentiment on the Shanghai and Tokyo exchanges, with futures trading vulnerable to fluctuations in currencies, crude oil prices and geopolitical developments, according to ANRPC.

While earlier in the year, bearish trends in NR prices were attributed to a fall in crude oil prices and sharp appreciation in the Chinese yuan and Japanese yen, third quarter volatility is linked to high inventories in Shanghai and slow demand by buyers, the association said.

After a mild recovery in August, rubber prices fell sharply in the second half of September. This, suggested ANRPC, could be attributed to the markets tracking Shanghai rubber futures closely.

For the same period, volatility was highest on the Shanghai Futures Exchange, where prices went down 20% in late September.

A strong yuan, explained ANRPC, supported the price rally in Shanghai rubber futures during the first half of September.

However, the high inventory reported in the market and a broad sell-off in global commodities hit Shanghai rubber futures back to Yuan13,000/tonne. This was after it peaked at Yuan17,590/tonne earlier in the month.

As ERJ reported earlier in October, unlike a number of commodities that benefited from China’s supply-side reform in capacity reduction, natural rubber, to some extent an agricultural product, did not get a piece of the action.

Adding to the situation, Thailand, Malaysia and Indonesia failed to reach agreement on curbing rubber exports as expected in mid-September. The trend in TOCOM was less dramatic, although prices did decline in the Japanese market too.

According to the ANRPC September report, the strength of Japanese yen is a “crucial factor” to determine the participation of investors in TOCOM as it is traded in yen.

“A stronger yen makes yen-denominated commodities more expensive for foreign investors, this will then affect the price of RSS-3 futures,” it explained.

Among some noteworthy figures within ANRPC’s latest monthly report is China’s NR consumption and its effects on the market.

Despite this decline, China remains the largest consumer of the commodity, with an anticipated 4.885kt demand for 2017.

China’s demand for NR peaked in 2016 at 4.944kt, while the non-ANRPC countries combined consumed 4.577kt during that year.

Over the first nine months of 2017 China remained the biggest importer of rubber, accounting for 73% of imports from ANRPC member states. The country posted a 21.1% growth in its imports, in the form of compound rubber, at 3,623kt.

Demand in India, meanwhile, grew by 2.5% year-on-year to 795kt. Sri Lanka and The Philippines, however, posted negative growth in consumption.