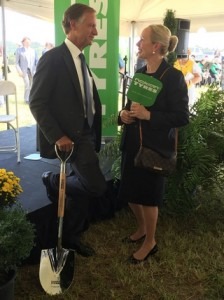 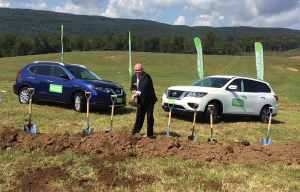 Dayton, Tennessee — The smiles were almost as abundant as the southeast heat and humidity on 20 Sept, as executives from Nokian Tyres PLC and officials from the state of Tennessee broke ground on the Finnish tire maker's first North American facility.

The $360-million facility will produce passenger, SUV and light truck tires specifically for North American consumers. It is scheduled to go on-stream in 2020 with 400 employees and reach an eventual capacity of 4 million tires per year.

With temperatures hovering in the 90s, Nokian president and CEO Hille Korhonen joined Tennessee governor Bill Haslam and a contingent of state, county and local politicians to celebrate the groundbreaking.

"This is really a historical moment for Nokian Tyres," Korhonen said from a tent erected at the plant site, as earthmovers dug in the distance. "I'm so proud of the company. We are so excited to get things moving. Through this almost $400 million US investment, we are showing our commitment longterm to serve our customers and to become members of this society."

The Tennessee State Building Board Commission recently approved a $28.4 million grant that will finance infrastructure, site development, equipment, construction and related work, according to terms of the grant.

"We have been looking forward to today for a long time. This not only is a really big deal in Ray County, but it's also a big deal for the state of Tennessee," Haslam said. " Nokian is world class company, committed to producing a great product in a sustainable way."

The location, tucked in the outskirts of Dayton, will have highway and rail transportation available nearby. The plot of land is large enough to accommodate a tripling of the planned facility's size.

"We are not only investing in the factory, we are also investing in people," Korhonen said as about 200 onlookers watched, some waving Nokian-branded hand fans. "We will be investing more into products, product development, marketing and also making us part of this society."

Antti Vanska, Finland's deputy chief of mission and the second highest ranking official at the Finish Embassy, said the factory only solidifies the strong relationship between the countries. He said the U.S. is Finland's third biggest country for exports.

"Finland is an open and modern economy," Vanska said. "Free international trade and free investments are the backbone of our economy. This is great day for both countries."