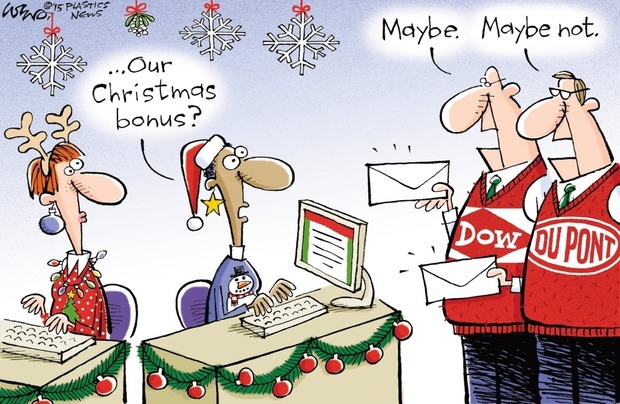 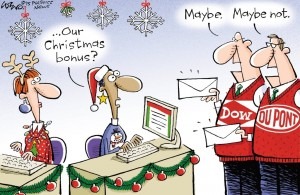 Dow Chemical Co. of Midland, Michigan, and DuPont, based in Wilmington, Delaware are coming together in a mega-merger.

The combined firm will be known as DowDuPont and will be split into three separate companies, one of which will include both firm’s plastics and rubber operations, the companies jointly announced on 11 Dec.

The two sides tried to work together once before – and it didn’t end well. DuPont Dow Elastomers LLC was launched in 1996 as a way for each company to expand its thermoplastic elastomer markets. But nine years later the JV and its $1.2 billion in annual sales broke up.

From a culture standpoint, Dow usually is regarded as having a strong dose of the down-to-earth nature of the US Midwest, even though it’s had only one US-born CEO – William Stavropoulos – in the last 40 years. DuPont seems to have a more formal East Coast flavour – and had a DuPont family member (Lammot DuPont Copeland) as CEO as recently as 1967.

You’ll notice that these cultural identities are tied to the firms’ headquarters locations – both of which will be maintained – even though each has thousands of employees at a multitude of spots around the globe. That kind of thing happens in business sometimes. If you’re the Ben & Jerry’s ice cream sales rep in a very conservative town, you’re still seen as a hippie.

In management, one former Dow executive described Dow as expecting staffers to make their own decisions, while DuPont employees more often make sure they have approval first. This doesn’t mean that Midland is a lawless frontier or that Wilmington is a military base, but these impressions have taken hold.

So what are the takeaways here, even at this early stage? One takeaway might be that it’s increasingly difficult – and maybe even undesirable – for chemicals and plastics companies to be all things to all customers. Even with recent selloffs – DuPont this year allowed Teflon-brand fluoropolymers to go with its Chemours spinoff – Dow and DuPont each make a wide variety of products for an even wider range of markets. In an increasingly specialized world, this strategy might not produce the results it used to.

Speaking of results, that brings us to our second takeaway: Don’t mess with activist investors. Dow has been tangling with Daniel Loeb and his Third Point LLC investment firm since late 2013. Third Point accused Dow of financial underperformance, but the sides appeared to reach a truce late last year when Dow named four new directors to its board. Dow’s continued struggles in 2015 may have caused rumbling in the Third Point camp.

DuPont’s battle with Nelson Peltz and his Trian Fund Management LP group was even more heated, leading to a proxy fight at the firm’s annual meeting in May. DuPont’s board nominees won out, but ongoing strife led to the resignation of CEO Ellen Kullman in October.

Depending on perspective, activist investors are either white knights protecting shareholders’ interests or craven opportunists looking for short-term profit. But there’s no doubt that activist involvement has been on the rise in recent years, as investors seek profits in lower-growth markets.

So a combined DowDuPont – as the company will be known, at least until the three-way split occurs – likely will be a nice Christmas gift for investors. Let’s hope it’s equally generous to all of those hard-working people in Midland and Wilmington, and at Dow and DuPont offices and plants around the world.